David who? Slow down, kid, we'll get there.

When we left off with our last installment of Road to Adepticon, Mike and I had finalized our plans for the two games we would run at the 2020 convention – A World War II naval action based on a hypothetical scenario with the U.S. going to war with Japan in 1937 after the Panay Incident, and a huge Team Yankee game re-imagining Operation Market-Garden in 1985. Ambitious plans, but we felt that because we were starting early in the year there would be no problems.

For a time we were right. For a time.

The first few weeks we got things sorted out as far as what forces we wanted to use for our games, what models we already owned, and what we would need to purchase. The naval game was pretty easy. Even though it's a hypothetical scenario, we would still be limited by the ships that were available to both sides in 1937. Mike, being a naval history enthusiast, already owned most of the American ships we would need. I would be supplying the Japanese ships and I owned nothing, but we didn't think that was an issue because the Japanese would have somewhere in the neighborhood of 30 ships. Not too bad, and having done the Italian fleet for 2019 Adepticon I knew that painting up the ship models at that scale really didn't take much time. Besides, we had plenty of time to get things finished. 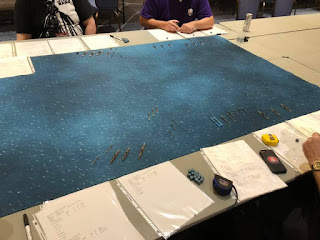 The Team Yankee game, however, now that was where the real stupidity came in - you could almost feel it in the air every time Mike and I talked in Discord. Every week one of us was sure to make a statement preceded by “Wouldn't it be cool if....” or “It would be crazy if we....” and then followed by an idea that would expand our game. We started off having a game involving a few companies of models on each side, and four or five weeks later we planned for a full regiment of Soviet T64 tanks and multiple supporting companies of tanks and paratroopers facing off against who knows how many companies of NATO forces.

All told I believe the total number of 15mm vehicles that will be involved in this game is more than four hundred (400!), with more than a hundred stands of infantry for good measure. We have the aforementioned Soviet tank regiment, we have French armor, Dutch armor, Polish Armor, British armor, and maybe German armor. We have French infantry, Dutch infantry, British infantry, and even Australian infantry. On top of that we have Soviet paratroopers and French Foreign Legion paratroopers and maybe even some German paras as well. Crazy, but we were filled with an unending supply of hubris, because we felt that with almost a full year to prepare there was nothing we couldn't do. And we loved the idea that it would be a fun game for a lot of players and if nothing else it would be memorable. 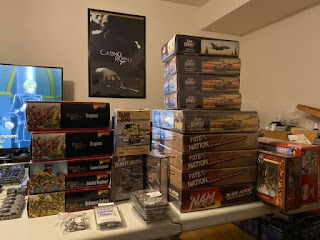 I don't have a problem

So with our plan finalized we had to get cracking, because neither of us owned much in the way of models for Team Yankee. Our first stop was our local game store where we cleaned them out of everything that we thought might be useful. Stacks of boxes of Team Yankee models. It was nowhere near even being close to filling out our orders of battle, but it would be enough where we could at least get a good start. That was the key, we thought, start early and work steadily through the year and we would be finished with plenty of time to spare for, hopefully, some playtesting before the convention. We figured as we started completing the models we had we could order more a little at a time to avoid being overwhelmed. It went swell.

Over the summer months is when our arrogance nearly sank us and where the hero of our story, the David Ensteness I mentioned earlier, saved us from ourselves.

The guy in the hat, the real hero of this story

David runs The Wargaming Company, the outfit behind a Napoleonic miniatures game called Et Sans Resultat! Yeah, I don't know what it means either, which is why it will always be just ESR. Mike had met David at Adepticon in 2018 and had picked up the rules because we had been talking for a long time about getting into Napoleonic wargaming. At Adepticon 2019 we spoke very briefly with David because he was extremely busy running demo games of the system. We ultimately bought quite a fair amount of the 10mm miniatures for the game with the idea of eventually moving ESR into our regular rotation of games we run down at the game shop.

And now for the arrogance.

Things were going so well for us into the early summer that we thought, during another one of our cigar nights oddly enough, “What could possibly be better than running two big games at Adepticon?” Running THREE big games at Adepticon is, of course, the answer. We got the idea that we would like to run a large Napoleonic battle in addition to our other two games. There was no doubt at all in our minds that painting up several hundred colorful 10mm miniatures on top of everything else we were doing this year would be child's play. We got this, baby! Oh, and did I mention that we had never even played the rules set? Not once. But when you are caught in the grip of madness, the absurd seems perfectly reasonable, and so it was for us. 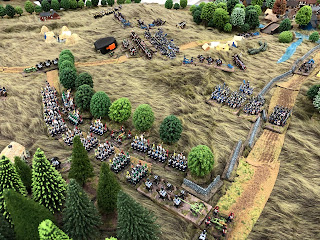 We decided that David had been such an excellent fellow when we met him in March, that we would contact him for advice on how best to accomplish our new objective. After a few emails were exchanged we set up a conference call, and in spite of the fact that we were basically just a couple of randos he had met in passing at the convention, David talked to us for more than an hour which I thought was quite generous.

Looking back on that conversation I give David a lot of credit, because he never once used the word “idiots.” I'm not sure I would have been able to do so were I in his position. He didn't exactly try to discourage us from running the big ESR game, but I think he did try to temper our expectations about it and tried to point out that learning the rules well enough to run a large game at a convention along with painting up the required miniatures would be much more of a challenge than we apparently believed it would be. He suggested running something very small, and that only if we were able to learn the rules well enough that we felt confident enough to run the game at a convention. I don't think we even discussed with him our plans for the other two big games we are running, because if we had I think it would have been impossible for him to hold off on the “idiots” thing. 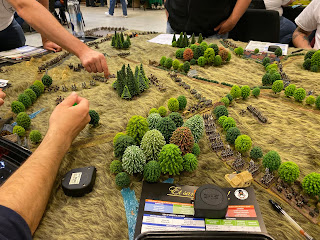 This was totally feasible

Mike and I came away from that phone call somewhat sobered by David's advice. It wasn't anything at all what we wanted to hear from him, but I think that it was the bucket of ice water that we needed. If you should ever happen to read this, David, thank you. I mean that. As you will all see in future articles in this series, if we hadn't had that conversation with David and had just gone ahead with our plans for adding a big ESR game, it would have been absolutely disastrous and may well have ended with us putting on much smaller games or no games at all.

In July Mike and I went to Historicon and met David again, and we were able to play in one of his demo games of ESR. Afterward we decided that our decision not to add the ESR game to our events this year was definitely the right one, and we also decided that we enjoyed ESR so much that we are definitely going to try to run a big game at Adepticon 2021. David, I want you to think about....Marengo. 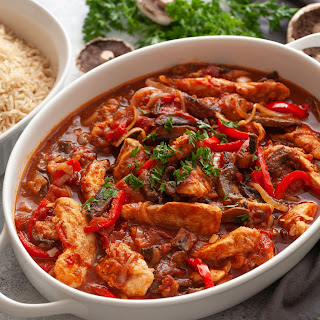 So that's this installment finished. It's not much in the way of actual nuts and bolts with lots of photos, but we wanted you to have an idea of what was going on throughout the summer. Next up.....Assembly! 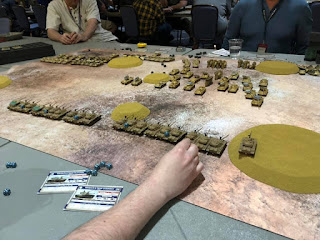 The Road to Adepticon 2020: A Cautionary Tale, Part I